A Crucified and Risen Saviour

“And without controversy great is the mystery of godliness; God was manifest in the flesh, justified in the spirit, seen of angels, preached unto the Gentiles, believed on in the world, received up into glory.” The more we study the subject of the redemption of the human race, the greater depths we find, and there, as we think of the Redeemer’s glory, are depths we can not reach. It is the glory of the Prince of Life, and the mightiest powers of man can not fully comprehend it. The angels themselves desire to look into this mysterious and wonderful theme. Writing by the inspiration of the Spirit of God, the apostle Peter says: “Whom having not seen, ye love; in whom, though now ye see Him not, yet believing, ye rejoice with joy unspeakable and full of glory; receiving the end of your faith, even the salvation of your souls. Of which salvation the prophets have inquired and searched diligently, who prophesied of the grace that should come unto you; searching what, or what manner of time the Spirit of Christ which was in them did signify, when it testified beforehand the sufferings of Christ, and the glory that should follow. Unto whom it was revealed, that not unto themselves, but unto us they did minister the things, which are now reported unto you by them that have preached the Gospel unto you with the Holy Ghost sent down from heaven; which things the angels desire to look into.”  {ST, July 12, 1899 par. 1}

It was in order that the heavenly universe might see the conditions of the covenant of redemption that Christ bore the penalty in behalf of the human race. The throne of Justice must be eternally and forever made secure, even tho the race be wiped out, and another creation populate the earth. By the sacrifice Christ was about to make, all doubts would be forever settled, and the human race would be saved if they would return to their allegiance. Christ alone could restore honor to God’s government. The cross of Calvary would be looked upon by the unfallen worlds, by the heavenly universe, by Satanic agencies, by the fallen race, and every mouth would be stopped. In making His infinite sacrifice Christ would exalt and honor the law. He would make known the exalted character of God’s government, which could not in any way be changed to meet man in his sinful condition.  {ST, July 12, 1899 par. 2}

Who is able to describe the last scenes of Christ’s life on earth, His trial in the judgment hall, His crucifixion? Who witnessed these scenes?–The heavenly universe, God the Father, Satan and his angels. Wonderful events took place in the betrayal of Christ. At His mock trial, His accusers found nothing by which He could be proved guilty. Three times Pilate declared, “I find no fault in Him at all.” 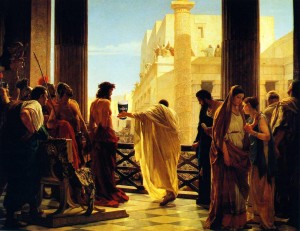 Nevertheless he ordered Him to be scourged, and then delivered Him up to suffer the most cruel death that could be devised.  {ST, July 12, 1899 par. 3}

“It pleased the Lord to bruise Him; He hath put Him to grief; when Thou shall make His soul an offering for sin, He shall see His seed, He shall prolong His days, and the pleasure of the Lord shall prosper in His hand.” It pleased God to bruise His only-begotten Son, to suffer temptation to come to Him, to permit Satan to develop his attributes and the principles of his government. The enmity of the apostate against the Commander of all heaven must be seen. It must be shown that Satan’s mercy is cruelty. What a battle was this, between Christ and Satan! It was waged up to the very time of the resurrection, yea, up to the time of the ascension. Then it was transferred to Christ’s followers, and today Satan wars against them.  {ST, July 12, 1899 par. 4}

During His lifetime Christ’s spirit was grieved because His own nation looked upon Him as a root out of dry ground, having no form or comeliness that they should desire Him. He longed for careworn, oppressed, weary human beings to come to Him, that He might give them the light and life and joy that are only to be found in Him. The veriest sinners were the objects of His deep, earnest interest, pity, and love. But when in the greatest need of human sympathy, in the hour of His trial and temptation, even the most promising of His disciples forsook Him. He was indeed compelled to tread the winepress alone, and of the people there was none with Him. An atmosphere of apostasy surrounded Him. On every side could be heard sounds of mockery, taunting, and blasphemy. Satanic agencies full of animosity strove to inspire the human family with deadly animosity against the law of Jehovah; and in his enmity the apostate was joined by the professed worshipers of God, for whom Christ had done so much.  {ST, July 12, 1899 par. 5}

The Lord of hosts suffered with His Son, but He did not abate one jot of the penalty. The world’s Redeemer heard the people taking the oath of allegiance to a rival sovereign. He heard them divorcing themselves from God, refusing to obey His rule, saying, “We have no king but Caesar.” As He hung on the cross, He heard them say tauntingly, “He trusted in God; let Him deliver Him now, if He will have Him; for He said, I am the Son of God.”  {ST, July 12, 1899 par. 6}

The Lord permits men to go to a certain length in sin, and then, as in the destruction of the old world, He will arise and punish the inhabitants of the earth for their iniquity. The earth will disclose her blood, and no more cover her slain.  {ST, July 12, 1899 par. 7}

“Behold, My Servant shall deal prudently, He shall be exalted and extolled, and be very high. As many were astonied at Thee; His visage was so marred more than any man, and His form more than the sons of men; so shall He sprinkle many nations; the kings shall shut their mouths at Him; for that which had not been told them shall they see; and that which they had not heard shall they consider.”  {ST, July 12, 1899 par. 8}

Thus it was. The terrible scenes of the crucifixion revealed what humanity will do when under Satan’s control. They revealed what the outcome would be if Satan was to control the world. Those who witnessed these scenes never lost the impressions made upon their minds. Many were converted, and told others of the awful scene they beheld. Many who heard the report of Christ’s death were converted, and commenced searching the Scriptures. Thus were fulfilled the words, “So shall He sprinkle many nations.”  {ST, July 12, 1899 par. 9}

“Thus saith the Lord God; I will also take of the  highest branch of the high cedar, and will set it; I will crop off from the top of his young twigs a tender one, and will plant it upon an high mountain and eminent; in the mountain of the height of Israel will I plant it; and it shall bring forth boughs, and bear fruit, and be a goodly cedar; and under it shall dwell all fowl of every wing; in the shadow of the branches thereof shall they dwell.”  {ST, July 12, 1899 par. 10}

Christ was this Branch, the highest branch of the highest cedar. He was the plant of the Lord’s setting. “As the apple tree among the trees of the wood, so is my Beloved among the sons. I sat down under His shadow with great delight, and His fruit was sweet to my taste.” Christ’s every act was acceptable to the Father. God loved His Son in His humiliation. He loved Him most when the penalty for the transgression of His law fell on Him.  {ST, July 12, 1899 par. 11}

Christ was the Majesty of heaven, the Commander of the heavenly hosts. But He put off His crown, and divested Himself of His royal robe, to take upon Him human nature, that humanity might touch humanity. As the world’s Redeemer, He passed through all the experiences through which we must pass. He found Himself in fashion as a man. He humbled Himself to do the greatest work that could be done for the human race. A beam of righteousness from heaven shone amid the moral darkness of this earth, to enlighten every man that cometh into the world.  {ST, July 12, 1899 par. 12}

Christ suffered in man’s stead, giving His life for the life of the world. All who repent and turn to Him are His heritage. His death proved God’s administration and government to be without a flaw. Satan’s charge in regard to the conflicting attributes of justice and mercy was forever settled beyond question. Every voice in heaven and out of heaven will one day testify to the justice, mercy, and love of God. {ST, July 12, 1899 par. 13}