Abba and Emma – Dad and Mom

. The same word AMEN or AMAN can be also translated as FAITHFUL. And its meaning is seen in these two pictures: Mother as a “strong water” or a “seed carrier,” the one who constantly nurtures her seed, her future. 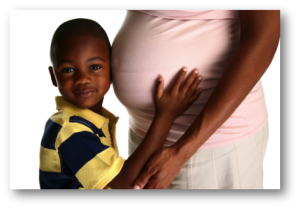 This baby-seed grows inside of her womb and is attached to her by the umbilical cord, which makes them extremely close, inseparable. The baby completely depends on the liquid nutrients passing through this cord from its mom. But what is amazing is that this connection lasts throughout their lifetime, long after the umbilical cord is cut off. Attachment of a child to his mother continues and even when we become grown ups this strong connection lasts.

When I was leaving my mom in Slovakia to catch the flight to San Francisco I looked back to see her in the window still waving at me. A brief chill ran through my spine. Her look was strange. Suddenly somehow I sensed that this was the last time I would see my mom alive! At the same time it occurred to me that she knew it too. 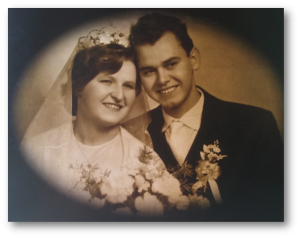 What a strong invisible cord of love between the two of us. Two years later, one evening we went to call my mom, with my Sylvia, and I was singing one of our Hungarian love songs to her (originally “Besame Mucho”). Next day my brother called me that our mom passed away in the early morning. God was so gracious to me that I could talk with her a few hours before she passed.

Dad & Mom, how important you are for us! You represent God and His love to us and if we don’t find it at home, we seek for it in wrong places.

God would have our families symbols of the family in heaven. Let parents and children bear this in mind every day, relating themselves to one another as members of the family of God. Then their lives will be of such a character as to give to the world an object lesson of what families who love God and keep His commandments may be. Christ will be glorified; His peace and grace and love will pervade the family circle like a precious perfume. {AH 17.2}

Look at this powerful description of how important the role of each mother is:

There is a God above, and the light and glory from His throne rests upon the faithful mother as she tries to educate her children to resist the influence of evil. No other work can equal hers in importance. She has not, like the artist, to paint a form of beauty upon canvas, nor, like the sculptor, to chisel it from marble. She has not, like the author, to embody a noble thought in words of power, nor, like the musician, to express a beautiful sentiment in melody. It is hers, with the help of God, to develop in a human soul the likeness of the divine. {MH 377.1}
The mother who appreciates this will regard her opportunities as priceless. Earnestly will she seek, in her own character and by her methods of training, to present before her children the highest ideal. Earnestly, patiently, courageously, she will endeavor to improve her own abilities, that she may use aright the highest powers of the mind in the training of her children. Earnestly will she inquire at every step, “What hath God spoken?” Diligently she will study His word. She will keep her eyes fixed upon Christ, that her own daily experience, in the lowly round of care and duty, may be a true reflection of the one true Life. {MH 378.1}
Yet, the cruel reality is in painful contrast to such a high calling. Look at the news:

The curses of promiscuity, abortion and illegitimacy

Sexual promiscuity begins early. Studies show that from 40 to 50 percent of U.S.teens are sexually active, with 20 percent having sexual intercourse by age 15.

And they are reaping the tragic fruits of breaking God’s command against engaging in sex outside of marriage Ex 20:14; Eph 5:3, 5; Heb 13:4; Rev 21:8). Young people ages 15-24 account for nearly half of the nation’s 19 million new sexually transmitted infections each year. One in four females ages 15 to 19 is infected with at least one sexually transmitted disease. And each year more than 750,000 15- to 19-year-old females become pregnant, the vast majority unintended.

With so many showing such disregard for God’s instruction regarding sex and marriage, it’s no surprise that the nation is suffering from twin curses of abortion and illegitimacy. According to the U.S. Centers for Disease Control and Prevention (CDC), almost one in five pregnancies (18 percent) in America end in the abortion of the unborn baby. The nation’s estimated annual death toll from abortion ranges from about 750,000 to over 1 million.

To put this in perspective, Americans were rightfully horrified by the terrorist attacks on Sept. 11, 2001, in which nearly 3,000 people lost their lives in the World Trade Center, the Pentagon and in the crash of an airliner in a Pennsylvania field. Yet almost the same number of innocent unborn children are murdered by abortion in America every single day. Where is the outrage? What does this tell us about the deplorable moral state of the nation?

Another sad fruit of the nation’s promiscuity is that the percentage of births that are illegitimate—children born to unmarried parents—is also dramatically rising. Of first births to mothers ages 15 to 44 today, almost half—46 percent— are illegitimate. For women ages 20-24, well over half—a staggering 61 percent —are to unmarried mothers.

…..
Let’s turn away from these depressing statistics and see again, what is the ideal, where we want to be heading. Father is a role model for his children and so in spite of our own brokenness we want to be fathers who can give support to our children not only financially, but especially morally. How? By showing them real example in our own lives.
The family tie is the closest, the most tender and sacred, of any on earth. It was designed to be a blessing to mankind. And it is a blessing wherever the marriage covenant is entered into intelligently, in the fear of God, and with due consideration for its responsibilities. {AH 18.5}
Every home should be a place of love, a place where the angels of God abide, working with softening, subduing influence upon the hearts of parents and children. {AH 18.6}
Our homes must be made a Bethel, our hearts a shrine. Wherever the love of God is cherished in the soul, there will be peace, there will be light and joy. Spread out the word of God before your families in love, and ask, “What hath God spoken?” {AH 19.1}
Christ’s Presence Makes a Home Christian—The home that is beautified by love, sympathy, and tenderness is a place that angels love to visit, and where God is glorified. The influence of a carefully guarded Christian home in the years of childhood and youth is the surest safeguard against the corruptions of the world. In the atmosphere of such a home the children will learn to love both their earthly parents and their heavenly Father. {AH19.2}
From their infancy the youth need to have a firm barrier built up between them and the world, that its corrupting influence may not affect them. {AH 19.3}
If you really want to study how to raise your children and protect them from so much corruption in today’s society, we encourage you to make time to listen and study our seminar called:

TRAIN UP A CHILD