Why Did The Virgins Fall Asleep?

Recently one sister discovered our character building seminar “From Glory to Glory”. She liked it so much that she decided to order it in DVDs and we started to communicate. Her name is Christine. She was so kind that she shared with me one of her studies. When I read it it was so impressive that I asked her for permission to share it with all who come across our website. If you are concerned about being prepared for Jesus second glorious advent, I am sure this study can inspire you to be aware what can bring us closer to Him who is altogether lovely. Here it is: 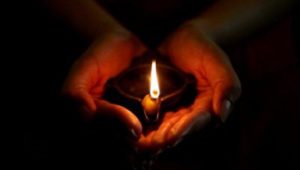 “All the ten virgins are apparently happy, full of joyous hope and anticipation. Apparently there is no difference between the five who are wise and the five who are foolish. To outward appearance all are prepared, robed in white, and carrying their lighted lamps, which represent the oil of truth. But the virgins did not expect to have to wait so long, and while the bridegroom tarried, they all slumbered and slept. They all made efforts to keep awake, but they ceased to speak often to each other, and when the call came, “Behold the bridegroom cometh; go ye out to meet him,” “it was unexpected.” EGW, Manuscript 144 {Ms144-1898.2}

3:16 Then they that feared the LORD spake often one to another: and the LORD hearkened, and heard it, and a book of remembrance was written before him for them that feared the LORD, and that thought upon his name.
3:17 And they shall be mine, saith the LORD of hosts, in that day when I make up my jewels; and I will spare them, as a man spareth his own son that serveth him.
3:18 Then shall ye return, and discern between the righteous and the wicked, between him that serveth God and him that serveth him not.

Here are the points that I see–

1) they that fear (reverence, honor) the Lord,

2) and speak to one another of the Lord,

4) the Lord listens, and hears it

5) and writes it in the Book

8) then ye shall return…and

9) be able to discern between the righteous and the wicked,

10) between those who serve God, and those who don’t. (wheat and tares?)

So all 10 virgins fell asleep because they didn’t keep each other awake by talking to one another of the blessed hope, The Bridegroom’s coming!! How did we miss that!!  Is this how to be a wise virgin?

Three more witnesses from the Spirit of Prophecy:-

“The Lord has shown me that great interest should be taken by Sabbath-keepers to keep up their meetings and make them interesting. There is great necessity of more interest and energy being manifested in this direction. All should have something to say for the Lord, for by so doing they will be blest. A book of remembrance is written of those who do not forsake the assembling of themselves together, but speak often one to another. The remnant are to overcome by the blood of the Lamb and the word of their testimony. Some expect to overcome alone by the blood of the Lamb, without making any special effort of their own. I saw that God has been merciful in giving us the power of speech. He has given us a tongue, and we are accountable to Him for its use. We should glorify God with our mouth, speaking in honor of the truth and of His unbounded mercy, and overcome by the word of our testimony through the blood of the Lamb.” {EW 115}

“The Majesty of heaven identifies His interests with those of the believers, however humble may be their circumstances. And whenever they are privileged to meet together, it is appropriate that they speak often one to another, giving utterance to the gratitude and love that is a result of thinking upon the name of the Lord. Thus shall God be glorified as He hearkens and hears, and the testimony meeting will be considered the most precious of all meetings; for the words spoken are recorded in the book of remembrance. . . .” {AG 184.3}

“We should individually know Jesus as a sin-pardoning Saviour. We should be able to testify to his compassionate love, and the virtues of the cleansing stream that washes away the stains of sin. Why not speak often one to another of the blessed hope held out before us in the great plan of salvation? Why not talk of the heavenly inheritance and of the rich promises of God? Jesus lives to intercede for us; then let us be glad. Let us come before the Lord with gratitude and praise in our hearts and on our lips. Let us, with rejoicing, speak to one another in psalms and hymns and spiritual songs, singing and making melody’ in our hearts to the Lord. “Whoso offereth praise,” says the Creator, “glorifieth me.” Let us not withhold the tribute that is His due.” {ST, December 4, 1884 par. 9}

2 Chronicles 20:21 And when he had consulted with the people, he appointed singers unto the LORD, and that should praise the beauty of holiness, as they went out before the army, and to say, Praise the LORD; for his mercy endureth for ever.
20:22 And when they began to sing and to praise, the LORD set ambushments against the children of Ammon, Moab, and mount Seir, which were come against Judah; and they were smitten.

All the virgins made efforts to keep awake, but they ceased to speak often to each other, and when the call came, “Behold the bridegroom cometh; go ye out to meet him,” it was unexpected. EGW, Manuscript 144 {Ms144-1898.2})

When these disciples communed together, Jesus appeared to them

Luke 24:13 And, behold, two of them went that same day to a village called Emmaus, which was from Jerusalem about threescore furlongs.

24:14 And they talked together of all these things which had happened.

24:15 And it came to pass, that, while they communed together and reasoned, Jesus himself drew near, and went with them.

The shepherds were talking together when an angel came to them….

In the fields where the boy David had led his flock, shepherds were still keeping watch by night. Through the silent hours they talked together of the promised Saviour, and prayed for the coming of the King to David’s throne. “And, lo, the angel of the Lord came upon them, and the glory of the Lord shone round about them: and they were sore afraid. And the angel said unto them, Fear not: for, behold, I bring you good tidings of great joy, which shall be to all people. For unto you is born this day in the city of David a Saviour, which is Christ the Lord.” {DA 47.3}

We are not to bring complaints and murmuring into our testimony in the social meeting, but we are to talk of the blessed hope, to reflect as much light as possible upon the meeting. The Lord of heaven has represented himself as looking on with interest as the names and testimonies of those who fear and love him are written in his book of remembrance. Those who engage in this order of service, who speak often one to another, are to be gathered in the day when the Lord shall make up his jewels; are to be spared as a man spareth his son that serveth him. {RH, November 12, 1889 par. 3}

The voice of thanksgiving, praise, and rejoicing is heard in heaven. The voices of the children of God unite with the voices of the angels of heaven, as they ascribe honor and glory and praise unto God and to the Lamb for the great salvation he has provided. {CE 131.1}